Open up the project in your favorite code editor and leave the ionic serve command running. Any changes we make will automatically be recompiled and refresh the app in the browser.

An Ionic React project is just a React project, with the setup you would normally find from a CRA app. One difference you might notice is that we use TypeScript.

We are big fans of TypeScript at Ionic, and we believe TypeScript in React provides a great, productive experience. However, if you want to use plain JavaScript, rename the files to use a .js extension and remove any of the type annotations from within the file, and your Ionic React app will now be a JavaScript app!

The src folder contains all the code for the app. The main entry point is the App.tsx file. Let’s break down what’s happening in this file.

At the top, we have the typical React and React Router imports, and then a series of imports from @ionic/react. Each of our Ionic components is exported as its own individual React component. In essence, Ionic React is a wrapper around the web components we have in the Ionic Core project but exported in a way that makes them feel native to a React developer. Any updates and enhancements we make to Ionic Core will automatically be available in Ionic React.

Next, we import a series of core CSS files. After those, there is also a variables.css file, which you can use to customize the theme of your app. For more info on theming your app, check out our doc on the subject.

Next, we have the main App component. Notice that in the starters, we are using 100% functional components. We are fans of this approach, but if you prefer class-based components, those work great as well. 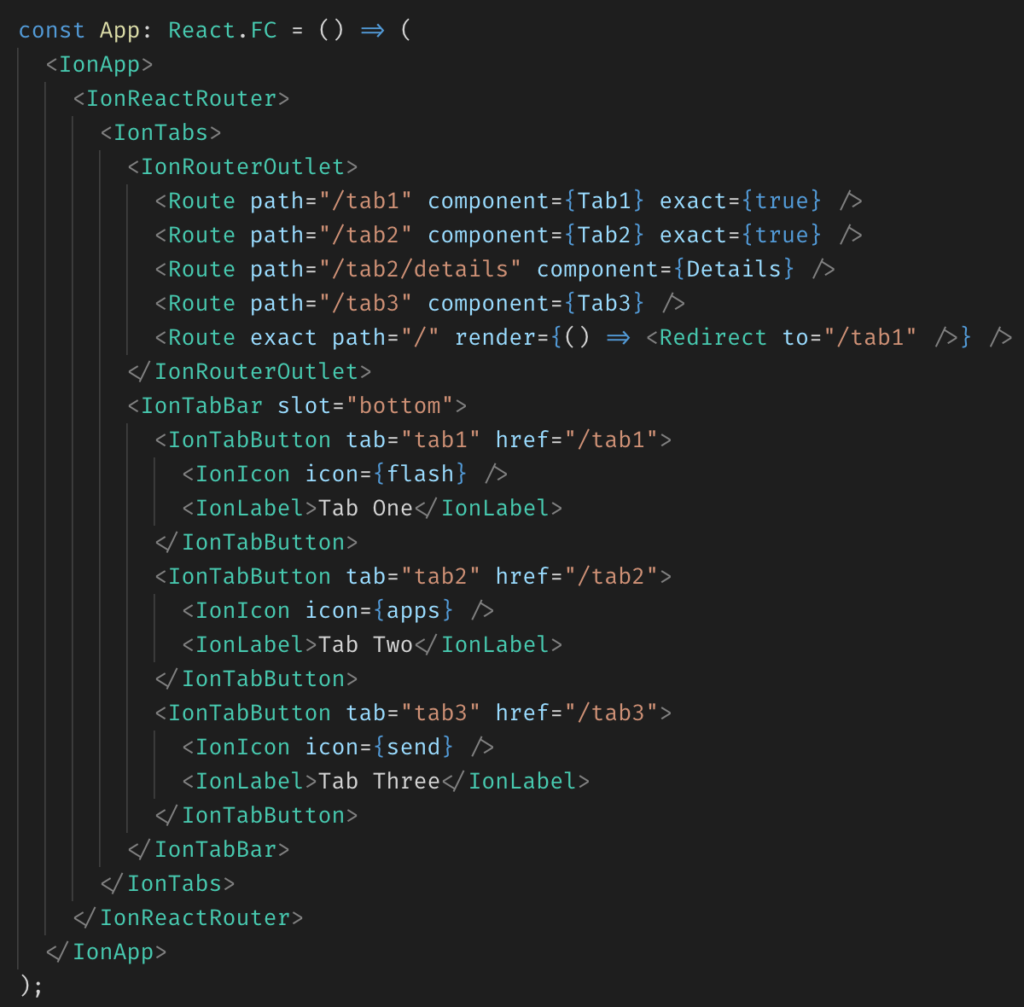 Each Ionic app starts with the IonApp component, which is the base container, and helps set up the screen to work great on both mobile and desktop. Next, the IonReactRouter component is a wrapper around the React Router library’s BrowserRouter component. To do the native-like page transitions and to maintain the state of the pages as you browse through your app, we augment React Router with some additional functionality.

The bulk of our tabs starter is now in the IonTabs component. The IonRouterOutlet contains a series of Routes (from React Router) for each of the pages in the tab interface.

Next, the IonTabBar component contains the bottom tab bar with a button for each of the pages, which forward to the Tab1, Tab2, and Tab3 components in the src/pages folder. The Tab1 and Tab2 pages have good examples on how to use some common Ionic components, but the Tab3 page is relatively bare. Let’s change that.

We will set up our empty tab to be a page to show a list of employees, with some demo data being pulled from the UIFaces project.

First, let’s update the tab bar in App.tsx to show a new label and icon:

The people icon is imported from 'ionicons/icons'

Open up Tab3.tsx , and replace the contents of the file with:

The people icon is imported from 'ionicons/icons'
Open up Tab3.tsx , and replace the contents of the file with:

First, we define a TypeScript interface for a Person, which will give us some type safety and code completion when using the employees a bit later on.

At the top, we import a couple of React hooks to use, the first is useState, which allows us to use state in our functional components, and the second is useIonViewWillEnter, which is a lifecycle method provided by Ionic that will fire each time the view comes into view.

We provide a function to the useIonViewWillEnter hook that will fire that will call into the UIFaces API (using the fetch API) and return a list of twenty-five people. When the fetch request finishes, we call setPeople to update the people state variable.

In the JSX, we have an ‘IonList’ component, which contains an EmployeeItem for each of the people. We separate out the EmployeeItem into its own component (defined a bit farther down).

With the updates to Tab3, we can now get a list of employees: 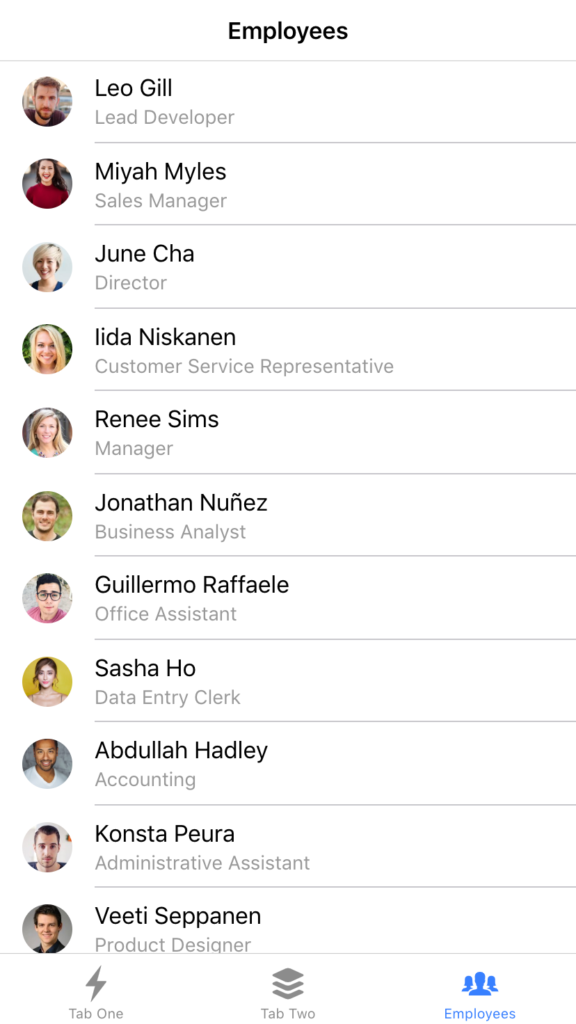 That is the basics on getting up and running with an Ionic React app!

For more Information and to build the app using Ionic, Hire Ionic Developer from us as we give you a high-quality product by utilizing all the latest tools and advanced technology. E-mail us any clock at – hello@hkinfosoft.com or Skype us: “hkinfosoft“.