Ionic React is a native React version of Ionic Framework that makes it easy to build apps for iOS, Android, Desktop, and the web as a Progressive Web App. All with one code base, standard React development patterns, and using the standard react-dom library and huge ecosystem around the web platform.

For those that have been following Ionic since the early days, it might be a surprise to hear that we now support more than just Angular, and React of all things!

When we started Ionic Framework, the mission was to empower web developers to build top-quality apps using their existing web development skills, focused on the massive ecosystem around the web platform and web technology.

But what about React Native?

You might be wondering why we’d build Ionic React when React already has a great mobile option with React Native.

However, when we took a step back, we realized that Ionic React brought something pretty unique to the React ecosystem, and had a very different vision for what the future of app development might look like.

Instead of building an abstraction on top of iOS and Android native UI controls, we wanted to build something that was DOM-native, that would use the standard react-dom library and all the libraries that supported it out of the box, and the decades of existing work around the browser. When we looked at installs for react-dom compared to react-native, it was clear to us that vastly more React development was happening in the browser and on top of the DOM than on top of the native iOS or Android UI systems (16x more, in fact!). That further confirmed our belief that “web devs wanna web dev” and take advantage of their experience and existing library of functionality they’ve built on the DOM.

On top of that, developers are increasingly interested in Progressive Web Apps, especially in the enterprise. PWAs are, at best, an afterthought in the React Native ecosystem (and actually, not officially supported). In contrast, Ionic Framework is one of the leading PWA solutions and has some of the best performance for PWAs in the entire web ecosystem, thanks in part to our work on our Stencil project which we use to generate highly efficient components under the hood.

This isn’t your father’s Cordova

While Ionic still supports Cordova, new Ionic apps run on an all-new cross-platform engine called Capacitor that we built in-house. Capacitor takes modern JS and browser features, and makes it possible to deploy one app across iOS, Android, Electron, and the web as a Progressive Web App.

In fact, Progressive Web App support was a major goal of Capacitor, and many Capacitor APIs have powerful PWA support, such as Camera which has a custom UI experience available for adding native-quality camera features to your PWA.

While it is inspired by Cordova, in practice the development experience is very different. Capacitor is available as a modern JS API you can import directly into your app, with easy-to-use APIs for everything from File management to Geolocation to app-to-app sharing, to Push and Local Notifications. And exposing new Native SDKs to Capacitor is incredibly easy, requiring just a bit of wrapper code with first-class support for Swift on iOS (Java on Android).

Note: The first official version of Ionic React is v4.11.

Getting started with Ionic React is easy. First, if you haven’t already done so, install the latest Ionic CLI:

Already have a React app? Adding Ionic React is easy.

Then, create a new project:

The CLI will guide you through the setup process by first asking a couple of questions. The first of which is what framework you would like to use, select React

Next, the CLI will ask which starter template you would like to use.

The CLI will now create your app and install all the dependencies. Once it is done, go into the directory and launch the app:

Under the covers, the ionic serve command uses the Create React App (CRA) project to compile your app, start a dev server, and open your app in a new browser window.

Once done, you will see your starter app up and running: 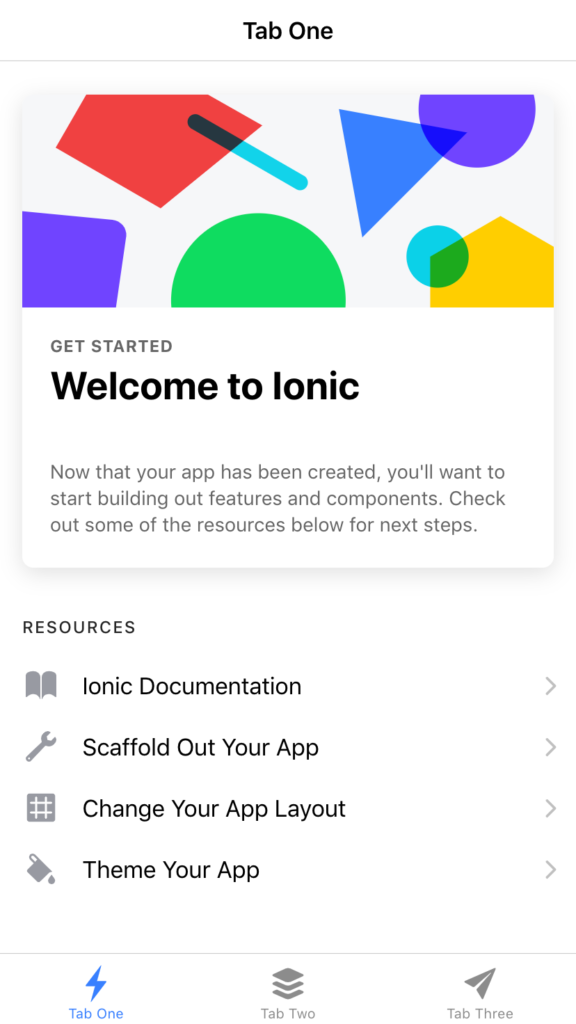 In our next blog, We will take a tour of what a stock Ionic React app consists of.

For more Information and to build the app using Ionic, Hire Ionic Developer from us as we give you a high-quality product by utilizing all the latest tools and advanced technology. E-mail us any clock at – hello@hkinfosoft.com or Skype us: “hkinfosoft“.