10 React component libraries you should know in 2018

The popularity of React seems to be ever growing. React is leading in popularity in Stack overflow’s 2017 most loved component libraries.

React’s virtual DOM, the ability to declaratively describe a user interface and model the state of that interface, low barriers to entry for a decent JavaScript developer, all make React a great go-to library for building UI’s.

Another great reason for working with React is components. Components let you split the UI into independent, reusable pieces, and think about each piece in isolation. To help kickstart your work with React components, here are 10 great React component libraries you should consider for your next app.

Many of these libraries can also be combined with Bit, which enables you to isolate and manage components in any SCM repository, share them to a Scope to make components individually available to discover and install, and keep them synced between different repositories and projects.

React Material-UI is a set of React components that implements Google’s Material Design. With over 30k stars on GitHub, it is probably the most popular React component library. The library’s v1 is coming up.

React-Bootstrap is a reusbale React component library with the look-and-feel of Twitter’s popular Bootstrap. At over 11k stars, its simplicity receives wide popularity in the community.

React Toolbox is a set of React components that implements Google Material Design specification. It’s built on top of some the trendiest proposals like CSS Modules (written in SASS), Webpack and ES6. The library’s website provides a live component playground.

React Belle is a set of React components optimized to work both on mobile & desktop devices. The styles are highly customizable so you can configure the base styles of all the components as well as modify each one of them individually. Here is also a nice example. 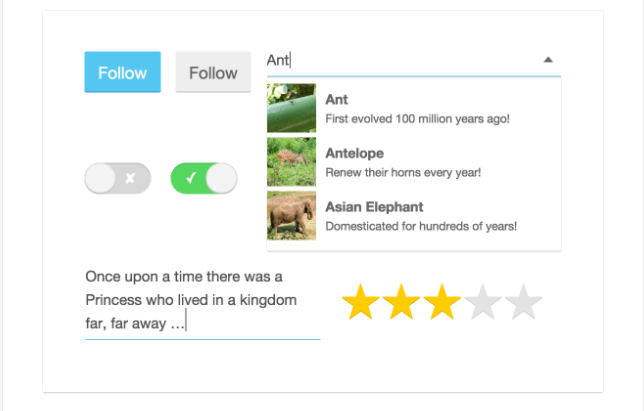 React Grommet provides a rich selection of components grouped by usage classifications, and all components are accessible, cross-browser compatible and support theme customization.

Material Components Web is developed by a core team of engineers and UX designers at Google, and its components enable a reliable development workflow to build beautiful and functional web projects. It has replaced react-mdl (which is now deprecated), already reaching nearly 7k stars.

Semantic UI React is the official Semantic-UI-React integration. With nearly 5k stars and used by Netflix and Amazon, these components provide an interesting and flexible arsenal.

For more information and to build your web app. Hire React.js Developer from us, as we give you high quality product by utilizing all the latest tools and advanced technology. E-mail us any clock at – hello@hkinfosoft.com or Skype us: “hkinfosoft“.