Vue 3 – The Progressive Javascript Framework’s progress over the years is nothing short of impressive.

If you’re someone migrating your apps to Vue 3 (or) experimenting Vue 3 for your next project this draft should help you kickstart with confidence. 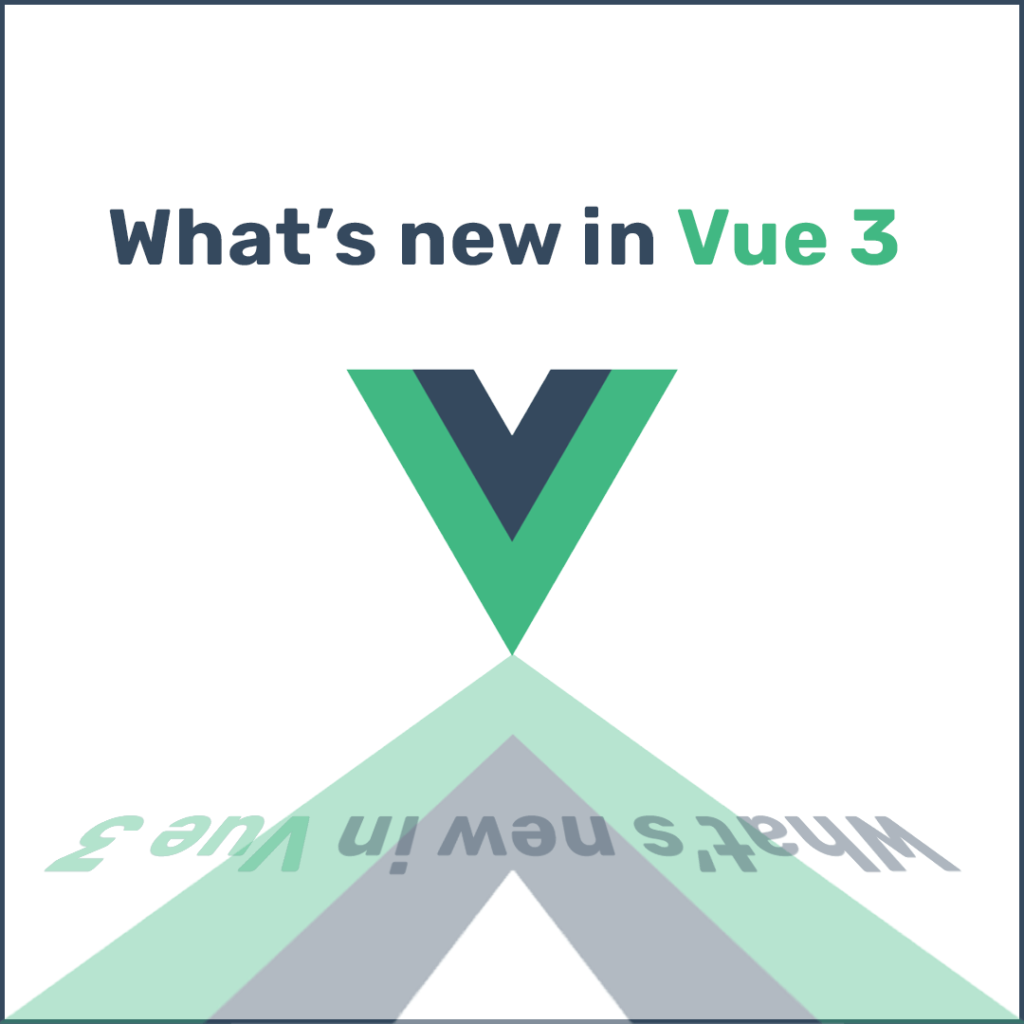 First of all, why does this update matter?

If we look at the journey of Vue so far, it greatly traversed being a library to a framework trend making it much more powerful yet sticking to its lightweight nature.

With the core releasing a new major version, all the other parts of the framework needed to move forward together. Having said that, there were quite a lot of new members we would have in our party during migration. Let’s get introduced!

In short, Vue 3 would be the new default.

Vue 2 would remain in LTS (long-term support) version for 18 months, which means that it will still get security updates and is absolutely safe to stick with it for a while. But, isn’t it a great time for us to migrate our existing projects if any?

Smaller Vue core – Size improvement reached by the combination of greater code modularity, a smaller core runtime, and a tree-shaking-friendly compiler. Thus the new core would thus be reduced from about 20KB to 10KB gzipped.

Better rendering performance – The Vue 3 renderer improves the performance of the rendering process by using optimizations such as the hoisting and inlining of static parts and implementing Vue 3’s reactivity with ES6 proxies.

Below is an infographic proofing the metrics between v-2.5 and v.3.0 proto 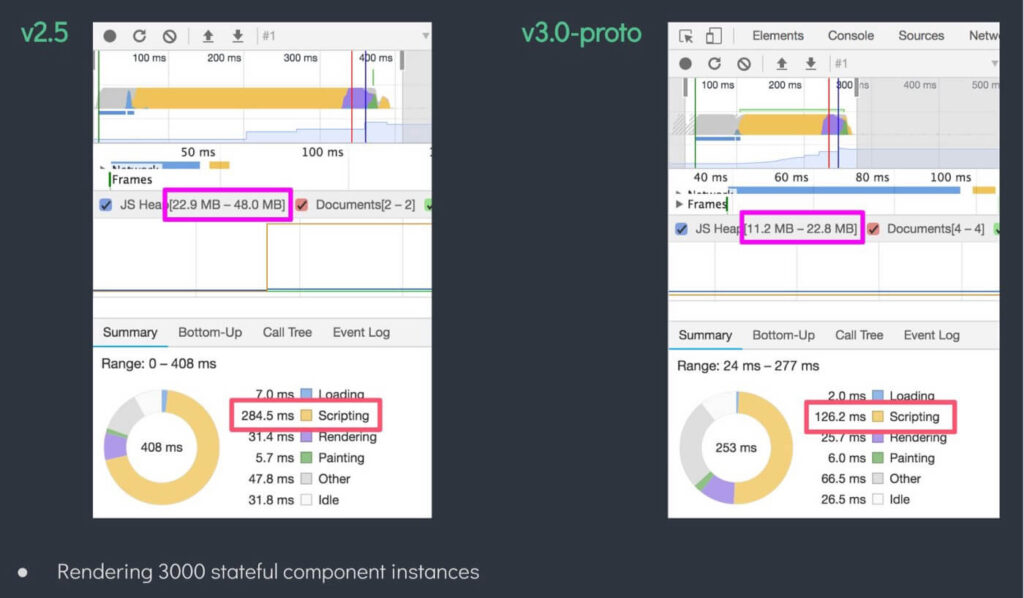 Vite – the next generation frontend tooling

Well, despite being one of our favorite topics to speak We’ll try to wrap it short.

Vite is a lightweight and fast build toolchain with first-class Vue SFC support. It is created by Evan You, the author of Vue himself!

Vue 3 official build setup is now powered by Vite. So this would be one of our newest members to welcome!

This topic deserves a separate article on its own, yet will try to pin those dancing in my mind post my experimentations.

Vue 3 introduced the Composition API as an alternative method to the Options API for writing component states and logic. It’s simply a set of APIs that allows us to author Vue components using imported functions instead of declaring options.

It is an umbrella term that covers the following APIs:

Lifecycle Hooks, e.g. onMounted() and onUnmounted(), allows us to programmatically hook into the component lifecycle.

Vue clearly pointed out that they don’t have any plans to deprecate options API. Here’s the exact statement from the document FAQ

No, we do not have any plan to do so. Options API is an integral part of Vue and the reason many developers love it. We also realize that many of the benefits of Composition API only manifest in larger-scale projects, and Options API remains a solid choice for many low-to-medium-complexity scenarios.

We can create standalone reactive states and/or properties

We can abstract reactive state

Sometimes setup in Vue components can get really bloated with creating many reactive properties. That’s why it could be nice to have them abstracted in standalone javascript files. This is preferably termed composable.

The primary advantage of Composition API is that it enables clean, efficient logic reuse in the form of Composable functions. It solves all the drawbacks of mixins, the primary logic reuse mechanism for Options API

Code written in Composition API and <script setup> is more efficient and minification-friendly than Options API equivalent. This is because the template in a <script setup> component is compiled as a function inlined in the same scope of the <script setup> code. Unlike property access from this, the compiled template code can directly access variables declared inside <script setup>, without an instance proxy in between. This also leads to better minification because all the variable names can be safely shortened.

Inside the setup hook, we can group parts of our code by logical concern.

The Options API uses options like data, methods, and mounted. With the Composition API, we have a single setup hook in which we write our reactive code.

This results in better code organization. Let’s see how with a simple code example. We’ll see how we write in Vue2, rewrite in composition API then further fine-tune with the new script setup syntax. 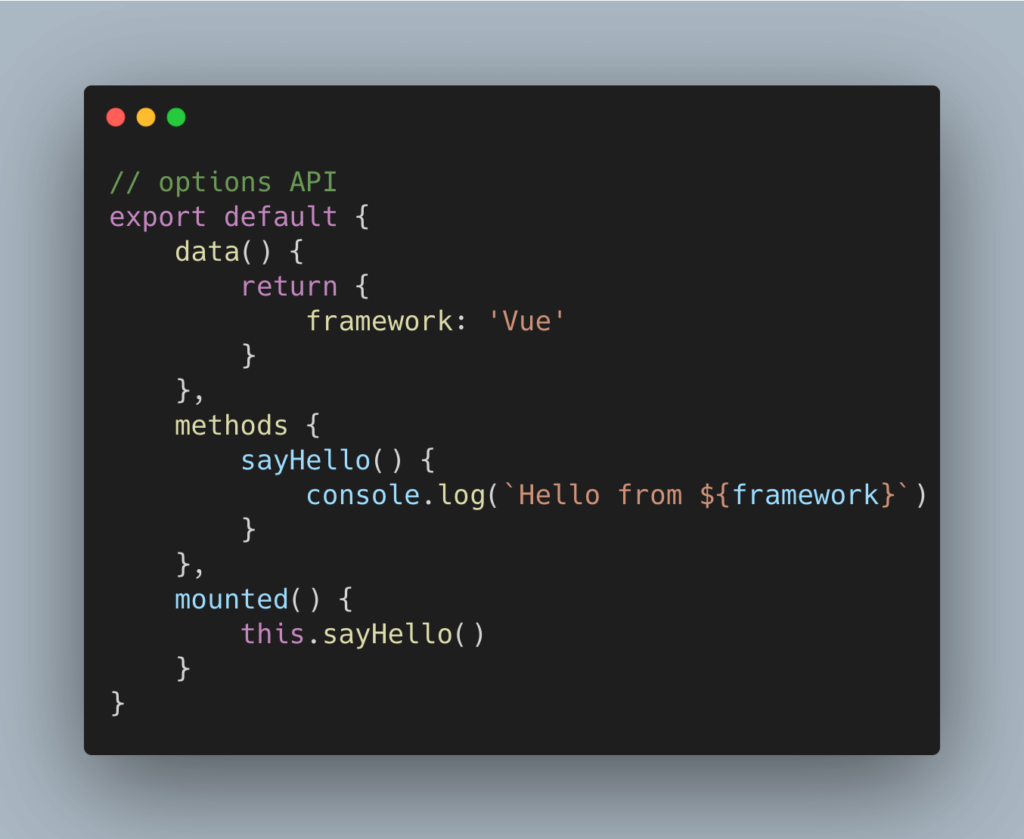 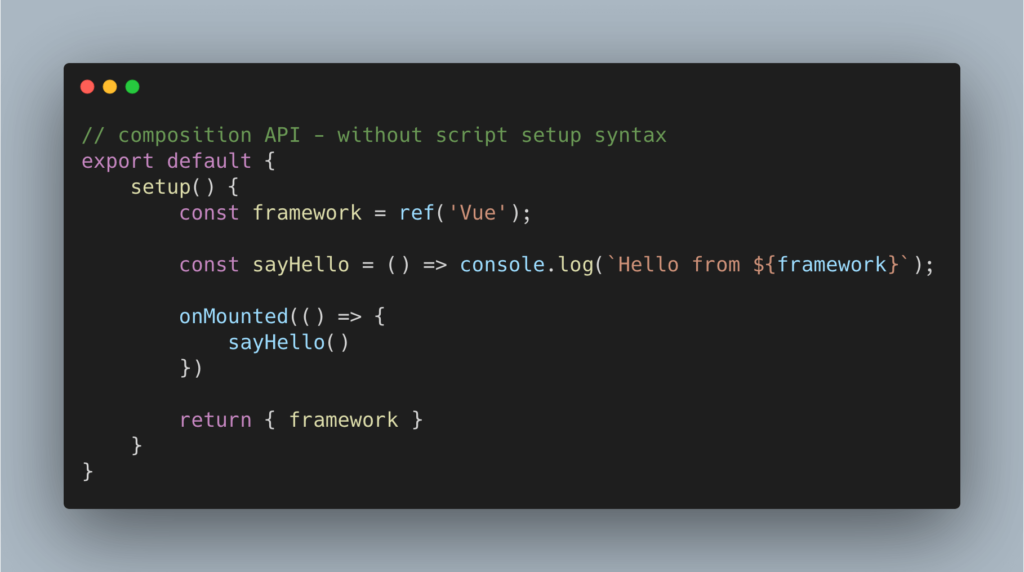 Having said Vue doesn’t have plans to deprecate options API anytime soon. Why should we care about composition API?

Vue 2 supports a few ways to reuse code between components;

These methods of reuse each come with their own drawbacks, namely:

Scattered logics – In Vue2, component options such as data, computed, methods, watch are used to organize the logic. This approach makes it hard to read and understand as the component grows.

<script setup> is a compile-time syntactic sugar for using Composition API inside Single File Components (SFCs). It is the recommended syntax if we are using both SFCs and Composition API. It provides a number of advantages over the normal <script> syntax:

Better runtime performance (the template is compiled into a render function in the same scope, without an intermediate proxy)

<script setup> can be used alongside normal <script>

For more information and to develop a website using Vue.js, Hire Vue.js Developer from us as we give you a high-quality product by utilizing all the latest tools and advanced technology. E-mail us any clock at – hello@hkinfosoft.com or Skype us: “hkinfosoft”.