As of today, Flutter’s web support has transitioned from beta to the stable channel. With this initial stable release, Flutter pushes reusability of code to another level with the support of the web platform. So now when you create a Flutter app in stable, web is just another device target for your app.

By leveraging the web platform’s many strengths, Flutter built a foundation for building rich interactive web applications. We primarily focused on performance and improvements to our rendering fidelity. In addition to our HTML renderer, we added a new CanvasKit-based renderer. We’ve also added web-specific features, such as a Link widget, to make sure your app running in the browser feels like a web app.

In this release, we’re pleased to announce that Flutter’s desktop support is available in the stable channel under an early release flag. What this means is that we’re ready for you to give it a try as a deployment target for your Flutter apps: you can think of it as a “beta snapshot” that previews the final stable release coming later this year.

To bring Flutter desktop to this degree of quality, there have been improvements both big and small, starting with working to ensure that text editing operates like the native experience on each of the supported platforms, including foundational features like text selection pivot points and being able to stop propagation of a keyboard event once it’s been handled. On the mouse input side, dragging with a high precision pointing device now starts immediately instead of waiting for the lag needed when handling touch input. Also, a built-in context menu has been added to the TextField and TextFormField widgets for Material and Cupertino design languages. Finally, grab handles have been added to the ReorderableListView widget.

The ReorderableListView now has grab handles for easy drag ‘n’ drop with a mouse
Pic courtesy: medium.comThe ReorderableListView was always good at moving items around with very little effort on your part as a developer, but it required the user to initiate a drag using a long-press. That made sense on a mobile device, but few desktop users would think to long-press on an item with their mouse to move it around, so this release includes a grab handle suitable for mouse or touch input. Another improvement for platform-idiomatic functionality is an updated scrollbar that shows up correctly for the desktop form-factor.

This release includes an updated Scrollbar widget that works great in a desktop environment
Pic courtesy: medium.comThe Scrollbar widget has been updated to provide the interactive features that are expected on the desktop, including the ability to drag the thumb, click on the track to page up and down, and to show a track when the mouse hovers over any part of the scrollbar. Furthermore, since the Scrollbar is themeable using the new ScrollbarTheme class, you can style it to match your app’s look and feel.

For additional desktop-specific functionality, this release also enables command-line argument handling for Flutter apps so that simple things like a double-click on a data file in the Windows File Explorer can be used to open the file in your app. We’ve also worked hard to make resizing much smoother for both Windows and macOS, and to enable IME (Input Method Editors) for international users.

In addition, we have provided updated docs on what you need to do to begin preparing your desktop app for deployment to the appropriate OS-specific stores. Give them a try and please provide feedback if we’ve missed anything.

When it comes to trying the beta for Flutter desktop, you can access it by switching to the beta channel as expected as well as setting the config flags for the platforms you’re targeting according to the directions on flutter.dev. In addition, we’ve also made a snapshot of the beta bits available on the stable channel. If you use ‘flutter config’ to enable one of the desktop config settings (for example, enable-macos-desktop), then you can try out the beta functionality of the desktop support w/o having to go through the lengthy process of moving to the beta channel and pulling down all the latest beta of the Flutter SDK, building the tools, etc. This is great for giving it a try or using the desktop support as a simple “Flutter Emulator.”

However, if you choose to stay on the stable channel to access the desktop beta, you won’t get new features or bug fixes as quickly as switching to the beta or dev channels. So, if you’re actively targeting Windows, macOS, or Linux, we recommend switching to a channel that provides updates more quickly.

As we approach our first full production-quality release of Flutter desktop, we know we have more to do, including support for integration with native top-level menus, text editing that feels more like the experience of the individual platforms, and accessibility support, as well as general bug fixes and performance enhancements. If there are other things you think need doing before the desktop moves to production quality, please be sure to provide your feedback.

In addition to Flutter desktop moving to beta, today we’re excited to announce an open beta for Google Mobile Ads SDK for Flutter. This is a brand new plugin that provides inline banner and native ads, in addition to the existing overlay formats (overlay banner, interstitial, and rewarded video ads). This plugin unifies support for Ad Manager and Admob, so no matter what size publisher you are, this plugin can be tailored to your scenarios. 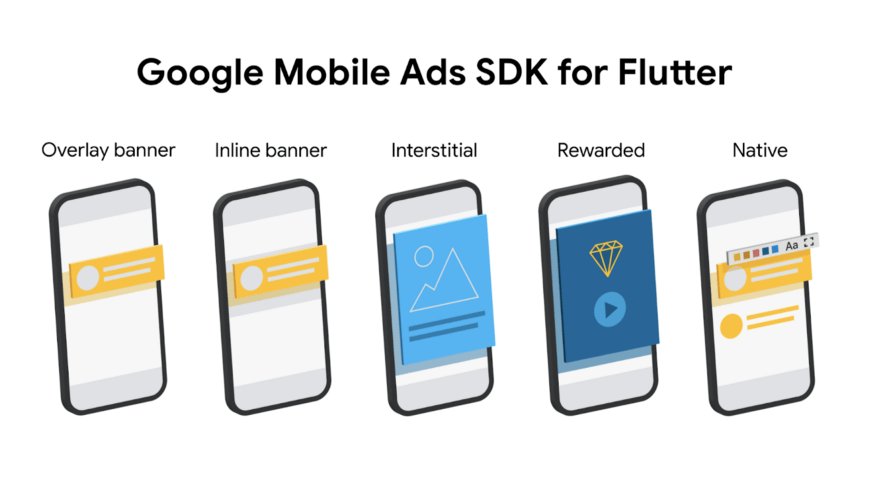 We’ve been piloting this plugin with some of our early customers in a private beta program, and many of them have successfully launched their apps with these new formats. For example, Sua Musica (largest Latin American music platform for independent artists with more than 15k verified artists and 10M MAU) launched their new Flutter app with the Google Mobile Ads SDK for Flutter plugin. They saw an 350% increase on Impressions with a 43% increase on CTR and 13% increase on eCPM.

This plugin is available for you to use today. As part of Flutter Engage, Andrew Brogdon and Zoey Fan presented a session on “Monetizing apps with Flutter” (available on the Flutter Engage site), where they talk about monetization strategies for apps built with Flutter, and how you can load ads in your Flutter app. Moreover, we created a new Ads page on flutter.dev where you can find all helpful resources such as the plugin implementation guide, the inline banner and native ads codelab, and the overlay banner, interstitial and rewarded video ads codelab. Please be sure to check them out!

For more information and to develop mobile apps using Flutter, Hire Flutter Developer from us as we give you a high-quality product by utilizing all the latest tools and advanced technology. E-mail us any clock at – hello@hkinfosoft.com or Skype us: “hkinfosoft”. To develop Mobile Apps using Flutter, please visit our technology page.