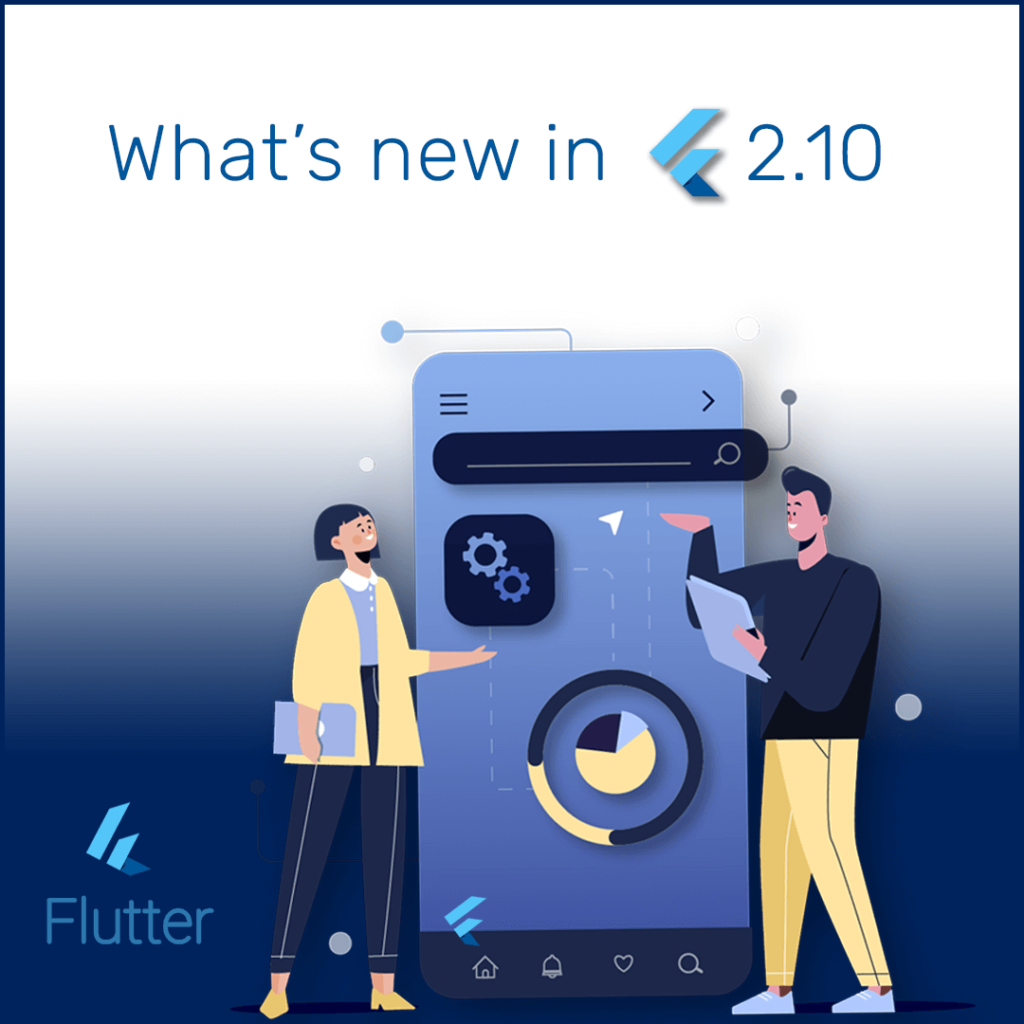 There are several exciting things to announce as part of this release, including a big update on Flutter’s support for Windows, several significant performance improvements, new support for icons and colors in the framework, and some tooling improvements. In addition, we’ve got some updates on the removal of the dev channel, reduction in support for older versions of iOS, and a short list of breaking changes. Let’s get to it!

Ready for production apps on Windows

First and foremost, the Flutter 2.10 release brings with it the stable release of Windows support. You no longer need to flip a flag to get the functionality that produces Windows apps on the stable channel of Flutter — now it’s available by default!

Of course, we did a lot more than just flip a flag. This release includes extensive improvements for text handling, keyboard handling, and keyboard shortcuts, as well as new integrations directly into Windows, with support for command-line arguments, globalized text entry, and accessibility.

For much more on the Windows stable launch, see the Announcing Flutter for Windows blog post, which describes the architecture of Flutter on Windows that allows for deep integration and gives you a sense of just how many Flutter packages and plugins already support Windows. You can also see some examples of what our tooling and app partners are doing with Flutter on Windows!

This release of Flutter includes initial support for dirty region management provided by Flutter community member knopp. He’s enabled partial repaints for a single dirty region on iOS/Metal. This change reduced 90th and 99th percentile rasterization times on a few benchmarks by an order of magnitude, and reduced GPU utilization on these benchmarks from more than 90% to less than 10%.

We expect to bring the benefits of partial repaints to other platforms in future releases.

In the Flutter 2.8 release, we landed our own internal picture recording format. Now in Flutter 2.10, we’ve started building optimizations with it. As an example, one common case of opacity layers is now implemented much more efficiently. Even in the worst case, frame raster times in our benchmarks fell to under a third of their previous value. 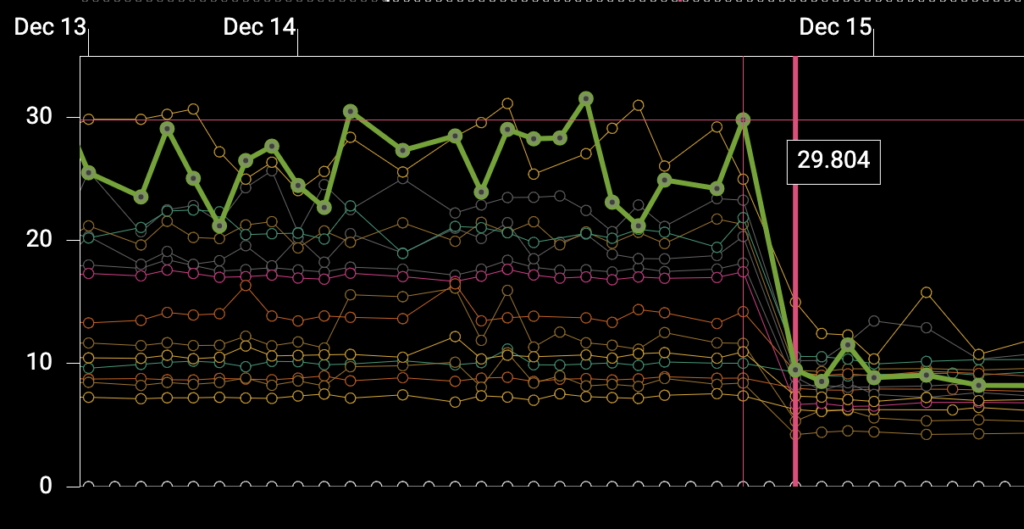 We expect this optimization to expand to cover more cases as we continue developing the picture recording format.

In profile and release modes, Dart code is compiled ahead of time to native machine code. The key to the efficiency and small size of this code is a whole program type flow analysis that unlocks many compiler optimizations and aggressive tree-shaking. However, as the type flow analysis must cover the whole program, it can be somewhat expensive. This release includes a faster implementation of type flow analysis. Overall build time for the Flutter app in our benchmarks fell by ~10%. 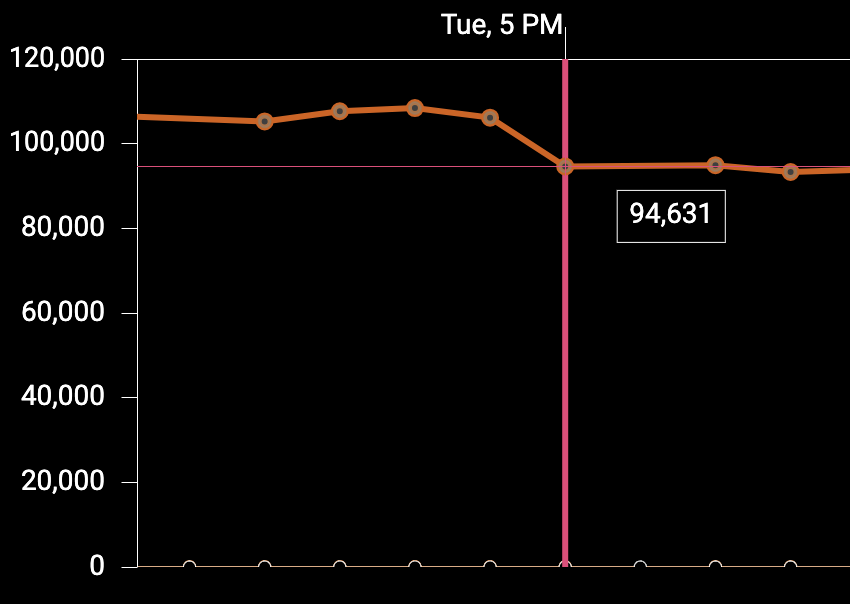 As always, performance enhancements, reduced memory usage, and reduced latency are a priority for the Flutter team. Look forward to further improvements in future releases.

In addition to performance improvements, we’ve also added some platform-specific features and enhancements. One new enhancement is smoother keyboard animations in iOS from luckysmg, which is provided automatically to your app without you having to do a thing.

We’ve also improved the stability of the camera plugin for iOS by fixing a few edge case crashes.

A 64-bit architecture represents pointers as a 8-byte data structure. When you have a lot of objects, the space taken up by the pointers themselves adds to the overall memory usage of your app, especially if you have larger, more complicated apps that have more GC churn. However, your iOS app is very unlikely to have enough objects to require a significant portion of even the 32-bit address space (2 billion objects), let alone the enormity of the 64-bit address space (9 million billion objects).

Compressed pointers were provided in Dart 2.15 and in this release of Flutter, we use them to reduce the memory usage for 64-bit iOS apps. You can check out the Dart 2.15 blog post for details.

And while you’re reading Dart blog posts, don’t forget to check out the Dart 2.16 announcement for updates on supporting Flutter for Windows with package platform tagging and a new search experience on pub.dev.

This release contains a number of improvements for Android as well. By default, when you create a new app, Flutter defaults to support the latest version of Android, version 12 (API level 31). Also, in this release, we’ve enabled multidex support automatically. If your app supports Android SDK versions below 21, and it exceeds the 64K method limit, simply pass the –multidex flag to flutter build appbundle or flutter build apk and your app will support multidex.

And last but not least, we listened to your feedback that Gradle error messages can be intimidating. For this reason, the Flutter tool now suggests resolution steps to common issues. For example, if you add a plugin to your app that requires you to increase the minimum supported Android SDK version, you now see a “Flutter Fix” suggestion in the logs. 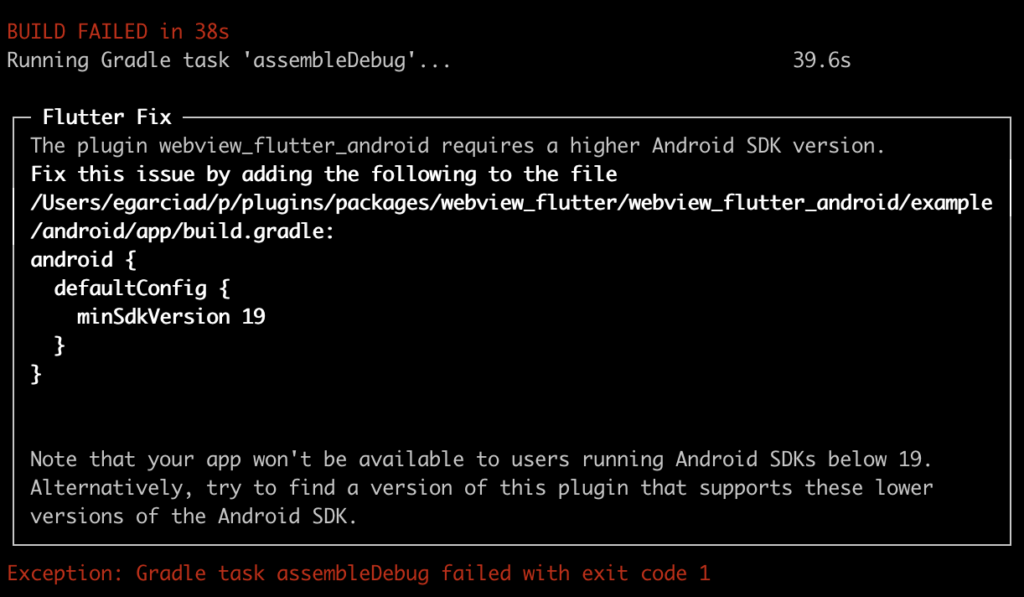 We continue to add more suggestions to common error messages, and would love to get your feedback on other error messages where this treatment would be useful.

This release contains some improvements on the web as well. For example, in previous releases, when scrolling to the edge of a multiline TextField on the web, it wouldn’t scroll properly. This release introduces edge scrolling for text selection: when the selection moves outside of the text field, the field scrolls to view the scroll extent. This new behavior is available for both web and desktop apps.

In addition, this release of Flutter includes another notable improvement in the web. We’re always looking to reduce the overhead of our mapping of Flutter to the web. In previous versions, every time we wanted to bring a native HTML widget into your Flutter app, we needed an overlay as part of our platform view support for the web. Each one of these overlays enables custom painting but represents a certain amount of overhead. If you have a large number of native HTML widgets in your app, such as links, that adds up to a lot of overhead. With this release, we’ve created a new “non-painting platform view” for the web that essentially removes that overhead. And we’ve taken advantage of this optimization in the Link widget, which means if you have many links in your Flutter web app, they no longer represent any significant overhead at all. We’ll be applying this optimization to other widgets over time.