This post will bring you closer to the most important new features and breaking changes in Angular 13 and help you decide whether an update for your project is worthwhile.

Angular has introduced its next-generation compilation and rendering pipeline Ivy since its version 8. Angular 9 has used Ivy by default while maintaining support for the predecessor compiler and runtime View Engine.

The new version of the framework is now 100 percent Ivy.

To streamline and modernize the Angular Package Format (APF), View Engine specific metadata and older output formats are now removed, which will reduce maintenance costs and the complexity of the codebase in Angular 13. All internal tools are converted to Ivy beforehand so that the change should work smoothly.

Ivy compiles individual components more independently of one another, which improves development times. The use of ngcc (Angular compatibility compiler) is no more required for libraries built with the latest version of the APF. This will offer a faster execution for libraries developers.

The load time is reduced in Angular 13 with the help of ergonomic code-splitting APIs and granular code breakdown at a component level.

The time to do a production bundle of 10 copies of the three.js library from scratch using default settings, including minification and source maps.
Pic courtesy: betterprogramming.pub

No More Support for IE11

To benefit from native web APIs and modern browser features such as web animations and CSS variables, the Angular team has removed the Internet Explorer 11 support.

This offers a smaller bundle size and faster load for apps and an improved user experience because of the absence of IE-specific polyfills and the no need for differential loading.

This breaking change will certainly affect authorities or institutions that still use IE 11 and have not yet switched to Microsoft Edge or other modern browsers.

You can now create dynamic components with less boilerplate code thanks to an improvement of ViewContainerRef.createComponent API.

Here is the old way of creating a dynamic component:

And with Angular 13, there is no need to use ComponentFactoryResolver:

TestBed is the primary unit tests API for Angular applications and libraries.

In order to decrease the test time in TestBed, the new version is released with an improved test API. The framework can now set up and tear down the test environment and learn the DOM automatically after each test run. This leads to faster, less memory-intensive, and better-isolated tests.

Angular 13 has introduced a new type for forms, which is FormControlStatus. It’s a union of all possible status strings for form controls:

There is an Accessibility (A11y) improvement in Angular Material: all Material Design Components (MDC) have been checked for better Accessibility.

Checkboxes and radio buttons, for example, have now larger touch sizes, and other components have better high contrast modes.

A comparison of touch target sizes. The sizes on the right are the new sizes. 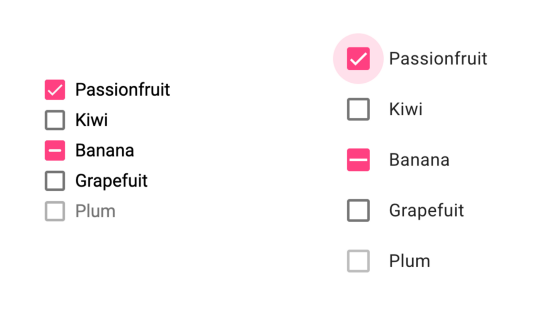 A comparison of touch target sizes. The sizes on the right are the new sizes.
Pic courtesy: betterprogramming.pub