January 17, 2019
hkis
Vue.js
Vue 3.0 – based on the reports, it looks faster, smaller, and easier to maintain than before and much more. We take a look at what’s ready for release, what needs more work, and how we’ll tackle the road ahead to Vue 3.0!

Vue 3 will be an improved evolution of the Vue.js we already know and love. It’ll take advantage of new abilities in modern browsers for better performance and use.

In general, the goal is a smooth transition over to Vue 3. No one wants a bumpy upgrade, least of all Evan You and the Vue team.

Let’s have a closer look at the main features of the 3.0 release.

As less configuration as possible

Vue CLI 3.0 aims to save you from unnecessary plumbing by making sure that all its features work nicely together. More precisely, the list of what the latest release offers includes:

Vue is already fast, but the team plans to make it even faster with a few new tricks. First off, the Virtual DOM rewrite is intended to shave off time from mounting and patching, with up to 100% improvements. More compile-time hints will reduce runtime overtime.

Additionally, the rewrite should include more efficient code to create virtual nodes. 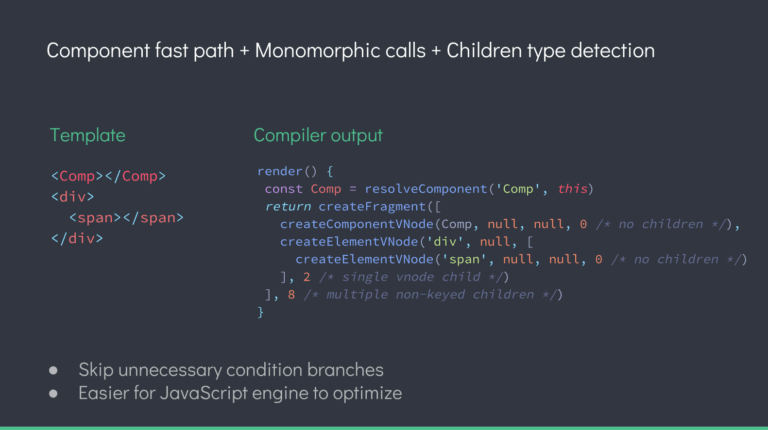 The Optimized Slots Generation is designed to ensure dependencies are tracked by the correct instance. Right now, when a parent component re-renders, its child has to as well. In Vue 3, the parent and child can be re-rendered separately. 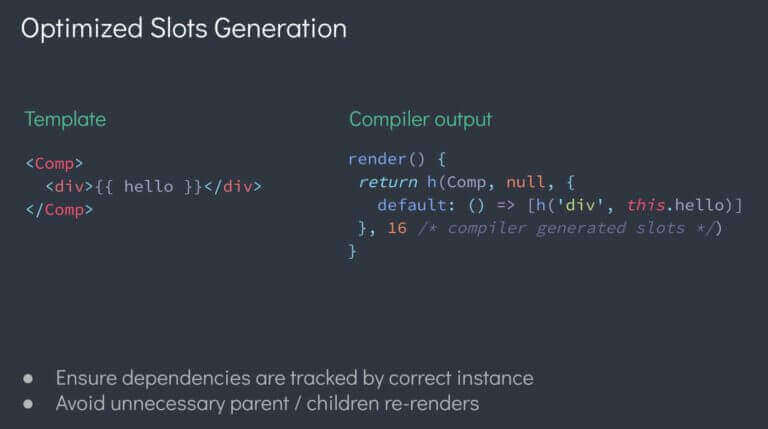 Thanks to the new static tree hoisting, Vue 3’s compiler can skip patching entire trees. It should work with multiple occurrences. It should also reduce the cost of rendering since the compiler will be able to detect what is static and then hoist it out. For the static props hoisting, it will now be able to skip patching the node itself and patch the children. 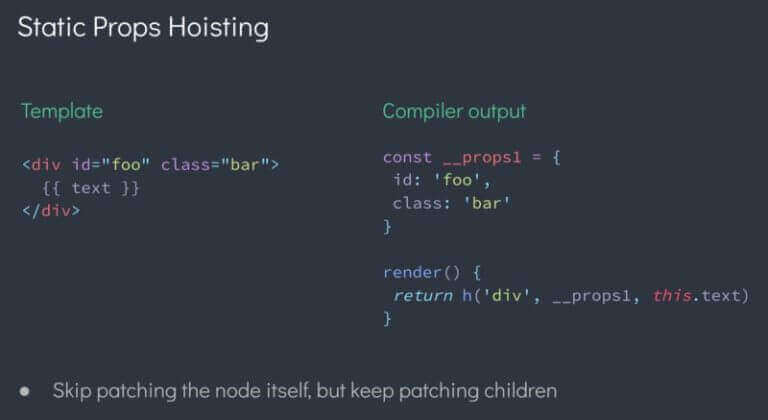 More importantly, the new proxy-based observation is estimated to double the speed and use half the memory for Vue’s reactivity system. Designed to use the ES2015 proxies, the new system removes any previously existing caveats, which accounts for the improved performance. However, Vue 3 will still support IE11 with the old observation method.

Vue is already pretty dang small, weighing in at around 20kb gzipped. However, this new release should come in at half that, with a constant baseline size of <10kb gzipped. How? Mostly by eliminating the libraries, you’re not using, like Tree Shaking. If you don’t use the element, it’s not included.

Easier to use and maintain

Vue 3 will support TypeScript. Additionally, packages will be decoupled, making everything more modular and easier to maintain.

Vue 3 is also platform agnostic, so developers can utilize it with their favorite Web, iOS, or Android technologies.

While this is far from a complete list, right now we have two new experimental features:

For more Information and to build the website using Vue.js, Hire Vue.js Developer from us as we give you a high-quality product by utilizing all the latest tools and advanced technology. E-mail us any clock at – hello@hkinfosoft.com or Skype us: “hkinfosoft“.