Skeleton screens are a great way to improve the perceived performance of your app, when combined with traditional optimizations (lazy loading, code splitting, etc).

Let’s dive a little deeper into what skeleton screens are, why they are better than traditional loading spinners, and how Ionic makes it easy to use them!

Skeleton screens, not a scary movie

You have probably seen skeleton screens before if you have used Facebook, Slack or Medium, but let’s go into detail about what they are. We can think of skeleton screens as rendering the “skeleton” or a “mockup” of content before it has actually loaded. For example, here’s what Medium does:

Another good example is Facebook. They make heavy use of skeleton screens in their native app and web app. They use a similar implementation to Medium, rendering a Skeleton Screen where content will eventually be: As we mentioned above, skeleton screens can be better at increasing perceived performance than loading spinners, but why?

Let’s consider an app that only uses loading indicators and look at how it could benefit from using skeleton screens. 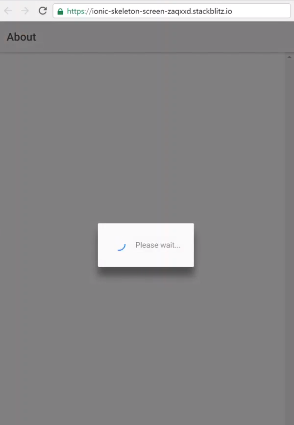 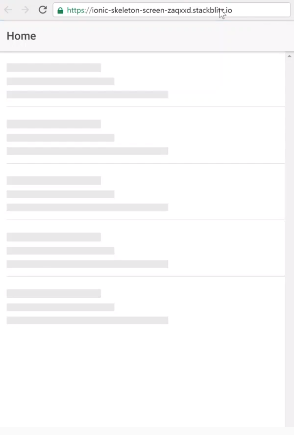 The page using a skeleton screen has several advantages here that lead to a better experience including:

Sweet, can I haz now?

Skeleton screens are pretty simple to make with plain HTML and a little CSS. Here is an example of a simple Skeleton Screen in Ionic-Angular.

In the above StackBlitz example, we hide the real list of users and display the skeleton list until the users have loaded using <code>*ngIf</code>. In our skeleton item we have the same DOM as our real item, an h2, h3 and p element.

We are always searching for ways to make things easy and in 4.0 of Ionic, we have a new web component called ion-skeleton-text. This will make adding skeleton screens even easier!

For more information and to build Mobile app using Ionic, Hire Ionic Developer from us as we give you high quality product by utilizing all the latest tools and advanced technology. E-mail us any clock at – hello@hkinfosoft.com or Skype us: “hkinfosoft“.