How to improve the performance of your React Native App

React-Native(RN) apps suffer huge performance issues as compared to native apps. During initial development days, such challenges are ignored but as soon as the app grows developers find it difficult to improve. Sometimes, extreme calls to dump the RN app happen. We can escape such steps and you can easily improve the RN app performance, just with little effort.

There are multiple ways to improve RN app performance:

Hermes: A JS engine to optimizes app start time, reduce APK size, and memory footprints. Follow this guide to setup for your app.

Remove Arrow functions: Every render creates new instances of these functions. When passed to children, it will re-render the child components even when nothing has changed in them.

Simple Reducers: Reducers are just to dispatch store changes, not for complex code logic, avoid that as much as possible.

Use native driver: Enable useNativeDriver=true for all the animations that you use in the app.

React.PureComponent: This works for class components. It does a shallow comparison for the previous and new props, re-renders if they are not equal.

Debugger warnings and errors: You need to get rid of them, just enable debugging, remove (console.disableYellowBox = true) and fix all the warnings, promise rejections, key errors and other errors too.

Android Studio Profiler: Great tool to find memory leaks in the app. In the below image, the bottom section has lots of bin icons(white color icons) that when android running its garbage collector and repeated icons indicate memory leaks. Perform actions in your app, debug them and fix asap. 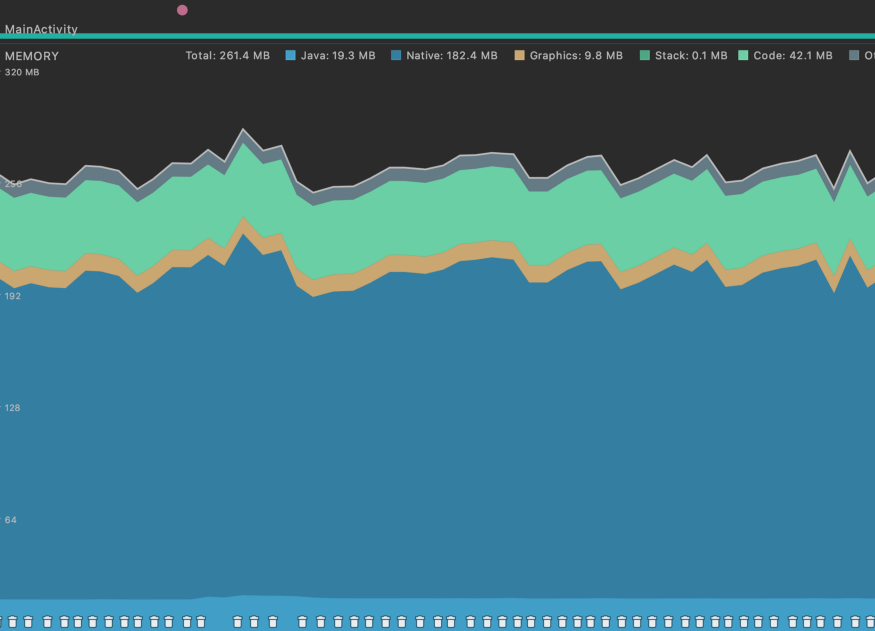 React-DevTools: React Profiler provides in-depth component-level leak detection, though it supports RN version ≥ 0.57. Profiler API helps in optimizations like memoization, cost of rendering, sluggish code, re-renders. Go through the docs to check how to integrate it with your app.

Inspecting RN bridge: RN Bridge works asynchronously and converts javascript queries as JSON, finally calling the natives modules. We are leaving for you to check out how to do this, there are numerous great articles on this, We will write more on this later.

React-native upgrade helper: RN community provides awesome documentation for upgrading RN versions. Major updates are between v0.60.0 and v0.63.0, there will be more errors you will need to fix. Do check out what’s new with v0.64 here.

Upgrade libraries & dependencies: A time-consuming process, during RN update also keep React in mind and upgrade accordingly, v17.0.0 has major changes. For every dependency you upgrade follow the below process:

That’s 90% of your whole performance improvement job. There are other ways like amalgamation of native code and RN code but we will leave that for some other time.

For more information and to develop mobile application using React Native, Hire React Developer from us as we give you a high-quality product by utilizing all the latest tools and advanced technology. E-mail us any clock at – hello@hkinfosoft.com or Skype us: “hkinfosoft”.