First off, let’s go over what Capacitor is and how it relates to other cross platform projects out there.

At a glance, Capacitor follows many of the same ideas as Apache Cordova. 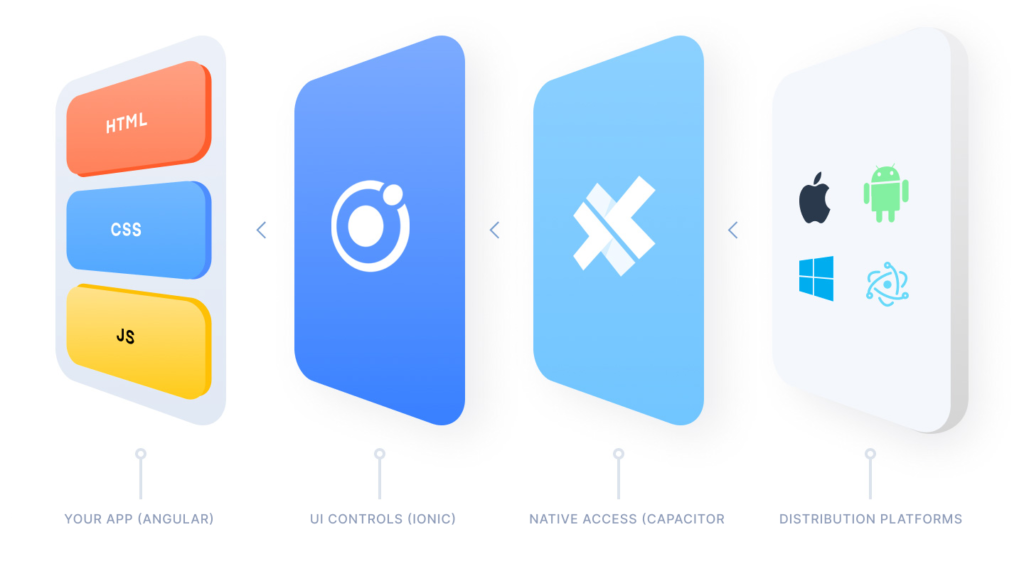 There is a Web layer that renders the app and a native layer that listens for calls to Native APIs. Within those layers are many technical decisions that make the overall developer and user experience much smoother.

These principles bring the best of web development and native development with little to no friction for developers.

Capacitor itself is made up of 2 packages, the core functionality (@capacitor/core) and the CLI (@capacitor/cli). To add Capacitor to your project, let’s start with a simple Angular App from the Angular CLI.

With the app created, let’s add Capacitor to our project.

With this, developers can add Capacitor to their project with ease.

When the schematic is done running, developers should build our app, and run npx cap add <ios,android> or yarn cap add <ios, android> and our Xcode or Android Studio projects will be created!

Pulling back the curtain

First, it adds Capacitor dependencies to the package.json: Core and CLI.

This will just do a quick npm (or yarn) install then make sure we have the Core and CLI packages for Capacitor.

To make sure that the Capacitor project understands your Angular project, the schematic infers a lot of data based on your angular.json. It will read your app’s name and use that when creating the iOS and Android projects, as well as read the build folder so it knows where to copy your web code when preparing the native projects. This means that your Capacitor project will feel like a natural extension of your Angular project.

Once added, we do a build of our app, and deploy to either iOS, Android, web, or Electron. For building to iOS or Android, you’ll need to have the native SDKs and tools installed.

For more Information and to build the website using Angular, Hire Angular Developer from us as we give you high-quality product by utilizing all the latest tools and advanced technology. E-mail us any clock at – hello@hkinfosoft.com or Skype us: “hkinfosoft“.